I’m so happy for my friend Brianna Nicols on the recent release of her latest novel The Reader and the Road, Book 2 of her Found Family series. As a reader myself, I think I’m going to be able to relate to Libby so much and enjoy the forced proximity of a road trip trope. 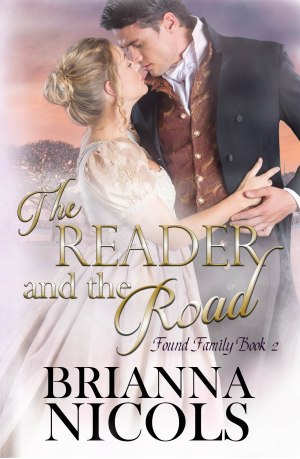 As a voracious reader, Libby couldn’t be happier working in the Duchess of Winston’s workshop. She’s surrounded by books, one of her best friends, and Adam, the man she’s secretly loved from afar for years.

Their livelihoods are threatened, however, when a difficult customer demands a book so popular, there are no copies available in England. To save the bookshop’s reputation, Libby must set out for Scotland in the dead of winter with an impossible task: retrieve the book by New Year’s or else.

Due to a childhood filled with disease and poverty, Adam despises everything to do with winter. All thoughts of avoiding the season end, however, when he hears of Libby’s impossible mission. Without a second thought, Adam agrees to travel with her, though it will test his resolve to keep his secret—and his feelings for Libby—hidden.

As they deal with blizzards, delays, and other mishaps, the bond between Libby and Adam only grows stronger. Their weeks-long journey will reveal long-held secrets and buried passions. No amount of love will matter, however, unless they make their deadline.

Perfectly titled, The Reader and the Road is a sweet, slow-burn romance between bookseller Libby and her co-worker Adam who accompanied her to Scotland to retrieve a rare book wanted by a demanding client. I love that both of them had been yearning for the other and were finally able to express their feelings once in the close confines of a carriage during their two weeks road trip.

This book is light and entertaining and I really like that it features working people instead of members of the nobility. I’d have loved it if Ms. Nichols expounded more on the holiday traditions during the time in addition to the exchange of gifts. That would have given the story a richer sense of time and place.

Brianna Nicols has always been a reader. Books about magic, history, or anything revolving around romance are her favorites. The idea of writing her own stories didn’t occur to her until 2017 when some awesome ladies online said: “Why not give it a try?”

Since then, she’s been experimenting with all sorts of ideas. Though a very organized person by nature, when putting words on the page, Brianna has found that she has to write the story as it comes to her. Unfortunately, she gets bored when trying to outline more than a handful of details. So far, Brianna has written in two genres; historical and contemporary romance. Anything paranormal is a love of hers, though, so something of that nature isn’t out of the realm of possibility. Rest assured, however, that when you pick up a Brianna Nicols novel, romance will always be a prominent, if not an integral, part of the story no matter the genre. My latest #review and #giveaway for @lonestarlit #lsbbt #bookblogtour of Betting on Love by @marybeesleywriter is live on my #blog Carpe Diem Chronicles
#TeaserTuesday
#loveislove in Texas Reads Romance at @lonestarlit this month and every month. Featuring books by @ingloriousgigi and @prisoliveras
Look at my new #stickers, looook!!! 🤩 Sooo cute! 🥰 Thanks, @thecoverfling 😘 Thanks, @vistaprint 🤗
FLAMES. FLIRTS & FESTIVALS #TeaserTuesday
Celebrating #lovingday 🥳 Because of it, my #interracialromance is legal. 🇵🇭🇺🇸 #intheendlovewins